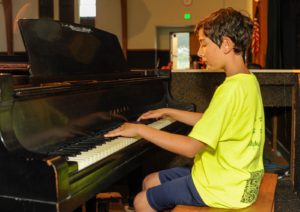 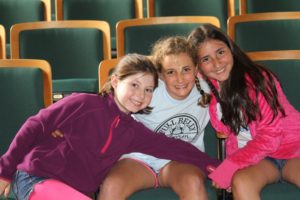 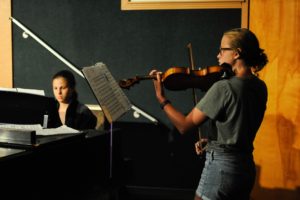 As we sat on the carpeted stage, I laid out the program to the attentive group of about 20 campers from ages 8-14: “You are going to create something from nothing.” Their eyes widened.

While Camp Ramah is known for musicals in Hebrew, at Camp Ramah in Northern California the Performing Arts track developed an entirely new model for creativity: each two-week session crafted their own show from scratch. Dancers became writers, actors became musicians, and we all became creators – together.

This was an enormous feat, all founded in Jewish thought and text. In his book Covenant & Conversation Rabbi Jonathan Sacks wrote, “Implicit in the first chapter of Genesis is thus a momentous challenge: Just as God is creative, so you be creative.” Sacks later continues, “Creation begins with the creative word, the idea, the dream.”

This is how we began. After our opening circle and warm-up, for three hours every day we engaged in the act of making. In our first session, we broke down the days of the first creation story and used them as not only a pedagogical model for our own creativity, but as the foundational inspiration for the kids’ own writing. For example, for day 1 of the creation story we engaged in text study in small groups of 5-6 campers. After this brief exploration, the kids did their own writing, inspired by the text. They received prompts such as, “If chaos (tohu vavohu) were a person, what would it look like?” or “write your own story of how the world began.” After writing, the kids came back to their small groups, and picked one story that stood out to them. This one story was then passed on to another group, which used the words to create a scene, song or dance. We created six songs over the course of the summer and two-dozen scenes.

This multilayered, thematic process steeped in Jewish text allowed for fluidity – where the original storywriter handed over their vision, and others could play with it. Egos were left at the door. Actors who had improvised scenes sometimes chose to hand over the role to someone else. It was beautiful, collaborative, and Performing Arts (Al Habamah) at Ramah Galim was all about the circle – the collective support of an ensemble.

Throughout the process I reminded them, “At some point you will feel uncomfortable. That’s okay, that is part of the process.” Inevitably when making something, we reach a phase of discomfort – we think it’s terrible and want to throw it out, lack the clarity of seeing where it’s going, fear being in front of our friends, or feel exposed. But this is part of the deal of making something, and if I could teach anything to the kids this summer, it’s that this phase is totally natural and important, and the sooner they could get comfortable with being uncomfortable, the more things they will create in the world.

We say in theater there are no small parts, only small actors. Every person in Camp Ramah in Northern California this summer was a part of a creative ensemble of a new camp. Al Habamah was a microcosm of the larger camp process, with moments of strong discomfort, each person, collaboratively, with no part too small, laid the foundation for a creative structure that will be the scaffolding for future years.

The title for our first session show, “Order in Chaos,” captured the spirit of our inaugural show of our inaugural year, and also the spirit of each of our lives. We truly were an ensemble in each session—tzevet, staff, and visiting artists –-and the creative spirit was fostered and recognized in each camper. As Jonathan Sacks concluded, “To help others become what they can be is to give birth to creativity in someone else’s soul. This is done not by criticism or negativity but by searching out the good in others, helping them see it, recognize it, own it, and live it.”

Read the next piece in this series, Sustaining an Ecosystem, by Marci Greenberg